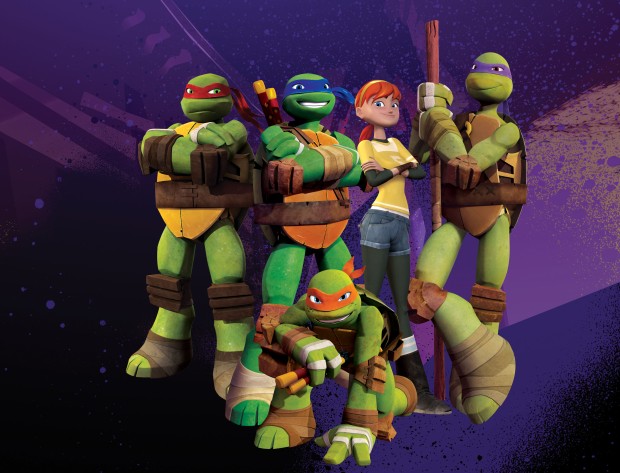 Composer Sebastian Evans is scoring the music for Nickelodeon Animation Studio’s “Teenage Mutant Ninja Turtles” TV series. Based in California, Sebastian Evans learned music theory as a kid and began to play piano when he was 10 years old. Evans’ mission to pursue music began after watching “Return of the Jedi” when he was seven. After participating in various musical entities until he reached college: a jazz band, concert orchestra, drum line and musical theater. Over the course of time Sebastian Evans also taught himself how to score music as a working professional.

“Sebastian Evans is one of the only black Composers in the industry, and he’s quickly rising in the competitive world of TV and film music. Evans is a creative type who is rapidly gaining accolades within the industry. Invigorating several hit animated television shows with his unique style, Sebastian has received considerable acclaim from fans and critics alike. Most recently, Sebastian’s distinct sound has helped reinvent the “Teenage Mutant Ninja Turtles” franchise starring Seth Green and Sean Astin. From his head-bob inducing main title theme to his seamless blend of Far East and Western musical styles, Sebastian provides a lively score that’s helped reinvent Nickelodeon’s Emmy-winning series for a whole new generation. Sebastian has also created scores for other hugely popular shows including “Cartoon Network’s Ben 10: Omniverse”, starring Yuri Lowenthal and Joe DiMaggio, “Transformers: Animated”, starring David Kaye and Tara Strong as well as “Super Robot Monkey Team Hyperforce Go”, starring Greg Cipes and Mark Hamill for Disney. He has also worked on various projects for “Warner Brothers” and “Adult Swim”. Also, in case you were wondering, his favorite Ninja Turtle is Donatello.”

Earlier this week in June 2016, a phone interview was booked between Sebastian Evans and Writer for Examiner, Nicolette Mallow.

Nicolette Mallow: When was the moment you realized the power of music and that you wanted to make music? How did you know that you were meant to be a composer?

Sebastian Evans: The day I saw “Return of the Jedi” for the first time when I was 7. That was when I really remember feeling something from the music and I wanted to replicate it myself. Specifically it was the moment when Admiral Ackbar says “It’s a trap!”… Right then and there I wanted to learn music. I wanted to know how to make the audience feel a certain way just by hearing the sounds. That scene in “Star Wars” stuck with me and I started taking music lessons soon after. By the time I was 10, I could play the piano and as time went by. I learned all kinds of musical styles. Eventually I moved out to L.A. with my band, but that didn’t work out. So then I got a job after sending demos to various studios. Warner Bros. hired me for “Cartoon Monsoon” which was an animated pilot program online. Later I made some connections standing in the “Star Wars” line at Mann’s Chinese Theater to see “The Phantom Menace”. Then I pitched to Disney. Along the way I met Ciro Nieli (Executive Producer of “Teenage Mutant Ninja Turtles” for Nickelodeon) and we began working together on various projects.

NM: Do you have a music ritual or a method of operation for when you create and compose? Or do the projects flow naturally and you write from the heart as it comes along?

SE: I used to write a lot more from the heart when it was personal, like for the band or my own art portfolio. But when it’s a project for a team: my style is based around the desire to reflect the Director’s vision. I want to support the film or the story. I try to stay flexible because you don’t always know exactly what the team wants. My focus for work projects are dictated by the team and how I can bring my own musical style to meet their vision.

NM: I am unfamiliar with writing music and putting audio or soundtracks onto film. What is it like writing for “Teenage Mutant Ninja Turtles”?

SE: Ninja Turtles has a lot of underground hip hop influences and a lot of loops. The music is often subtle and grey as to not overpower the story, dialogue or the characters. But the Director is also seeking to get something across that emotes something in a scene that would not be as prevalent without the music accompanying it. Music foreshadows events that are about to happen, or perhaps it uplifts the mood or makes the tone more serious. It all depends on the situation at hand. We have a couple of meetings every episode and we discuss what the scene needs. This helps me create a score that will benefit the character building of the story within each episode.

NM: Did you always intend to write for animation, comics or cartoons? Or did this path sort of unfold naturally?

SE: Yes, it all sort of unfolded naturally. My end goal in the future is to work on movies, but I really love working on animation for television. It’s been a learning experience and very rewarding because I never imagined that I would be where I am now. My roots in music are very scattered and I grew up listening to classical, like Mozart and the greats. Yet I also love metal and alternative. I will play Mos Def, Timbaland and Wu Tang during the same duration as I listen to Bjork or classical. So, yeah, I would like to explore as many characters as possible through TV and film in the future. But I am grateful for where I am right now and enjoy working on animation.

NM: Out of all four ninja turtles (Leonardo, Raphael, Donatello and Michelangelo), why is Donatello your favorite?

SE: Donatello seems like the outcast. He’s the brains and the nerd of the group. Donatello is also a romantic yet he’s very shy. And I just like him because he’s cool with being different and I felt a kinship to his character.

NM: Interesting. I relate most to Raphael because he’s the most fiery, hot tempered and yet also the most sensitive. Do you have any favorite hobbies outside of composing music?

SE: I watch a lot of comedy shows and I build LEGO® bricks a lot.

NM: That is awesome. I love LEGO® models. Thank you so much for your time. I enjoyed interviewing you and look forward to watching the TV series with my godson, Micah. He loves “Teenage Mutant Ninja Turtles”.

SE: You’re welcome. I’m glad to hear kids like the show. Thank you for interviewing me today.

Note: This article was originally published on Examiner.com in June 2016.

Nicolette Mallow is an Artist: writer, dancer, vocalist, thespian and model. Writing is Mallow’s strongest artistic skill. Internationally published in the United States and Europe, Nicolette has obtained 110+ publications thus far. Mallow has interviewed an extensive list of talent and collaborated with companies and PR teams from Texas Monthly, National Geographic, Prevention Magazine, HBO Films, The Hollywood Reporter, SXSW, The David Lynch Foundation, Cine Las Americas, The University of Texas at Austin and more. Presently her portfolio entails 12 national awards or scholarships, including both individual and group projects. Working with Press and Publicity teams from companies like Sunshine Sachs, Fons PR, Frank PR and CW3PR — Mallow can liaise with publicists, entrepreneurs and their brands. Since 2005, for 15 years Nicolette Mallow has covered hundreds of press, corporate and red carpet events as a writer. Mallow has interviewed talent far beyond her years including the following: Jimmy Chin, Greta Gewig, Bob Roth, Dr. Travis Stork, Joan Lunden, Larysa DiDio, Lauren Handel Zander, James White, Jay Roach, Naomi Whittel and Roc Chen. Once, she was a public speaker at a nation wide business conference. Her career is diverse and transcends a vast array of industries, but the focus is always the arts. Nicolette Mallow does enjoy all forms of writing, but her favorite writing genres to create entail editorial, arts & entertainment, literary journalism, travel, magical realism, nonfiction, technical and promotional publicity. Over time Nicolette has attained Press Credentials to events like Texas Film Awards (hosted by Austin Film Society), The Mexic-Arte Museum, Austin Film Festival, Euphoria Music Festival and The Blanton Museum of Art. She also wrote for Savannah Magazine, a radio station operated by EMMIS Communications, District newspaper and the Thinkery (formerly Austin Children’s Museum). In her spare time, Nicolette is creating a magical realism novel and turning her nonfiction memoirs into short story novellas. Obtaining two degrees from the Savannah College of Art & Design (SCAD), she has a Master of Arts degree in Arts Administration (a graduate degree now recognized as Creative Business Leadership) and a B.F.A. in Writing and. Born and raised in Texas and NYC—Nicolette Mallow is also a world traveler that lives for art and loves to learn. “L’art Pour L’art.” www.nicolettemallow.com View all posts by Nicolette Mallow