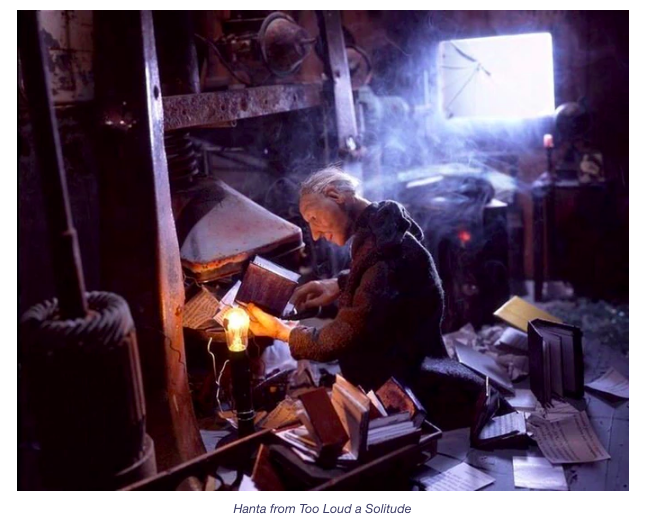 “My education has been so unwitting I can’t quite tell which of my thoughts come from me and which from my books, but that’s how I’ve stayed attuned to myself and the world around me for the past thirty-five years. Because when I read, I don’t really read; I pop a beautiful sentence into my mouth and suck it like a fruit drop, or I sip it like a liqueur until the thought dissolves in me like alcohol, infusing brain and heart and coursing on through the veins to the root of each blood vessel.” – Bohumil Hrabal

An imaginative production crew seeks to fundraise resources to launch a full-length feature film about Czech writer Bohumil Hrabal’s novel, Too Loud a Solitude.  Directed by Genevieve Anderson and starring Paul Giamatti as the voice of Hanta, Too Loud A Solitude (Příliš hlučná samota) is a feature adaptation of Bohumil Hrabal’s beloved book made with live action puppets, animated sequences and visual effects.

This globally famous novel is about a book crusher, Hanta. Watching the trailer of Too Loud A Solitude is like entering a magic portal to another dimension where Bohumil Hrabal’s book takes place in a world of puppetry.  An intimate, sneak peek to Hanta’s daily life and his private love affair with the books and their stories. A mirror reflection of Hrabal’s writing voice and how each book he created almost seems to be a personal letter written to each individual reader as opposed to the masses. As the camera soars in over the skyline of the town and we see gears grinding, scraps of papers tossed about and a city that seems to be very cold and quiet. Characters bundled up in many layers, speaking to each other without speaking as they go about daily life. The music is hypnotic and dreamy with its romantic yet haunting tune of a melancholy violin.

“Too Loud a Solitude is the story of a waste compactor, Hanta, who was charged with destroying his country’s great literature in his humble press, and who fell so in love with the beautiful ideas contained within the books that he began secretly rescuing them – hiding them whole inside the bales, taking them home in his briefcase, and lining the walls of his basement with them. It became one of the defining books in Czechoslovakia’s history for its unsentimental, humorous, painfully relevant portrayal of humankind’s resilience. The story of Hanta’s quest to save the world of books and literature from destruction is often cited as the most beloved of Hrabal’s books. Too Loud a Solitude has a global fan base and an active community of support has emerged for our feature film project. The book has been translated into 37 languages and sold over 70,000 copies of Michael Henry Heim’s English translation alone. Bohumil Hrabal wrote the novella as an unsentimental account of what happened to him during the Russian occupation of Czechoslovakia during the 40’s and 50’s. Many of Hrabal’s books were banned by the Russian regime and other great books by many authors were physically destroyed, an act Hrabal characterizes in Too Loud a Solitude as ‘crimes against humanity’… Our team has been committed to bringing Czech writer Bohumil Hrabal’s beloved novella Too Loud a Solitude to the screen since 2004. With the assistance of The Rockefeller Media Arts Foundation (now the Tribeca Film Institute), Heather Henson and Handmade Puppet Dreams, and The Jim Henson Foundation, we completed a 17 minute sample of the film in 2007. The film has been playing nationally and internationally in the Handmade Puppet Dreams program, and in 2009 was awarded an UNIMA-USA citation of excellence. We are currently working on financing the feature project, first through a Kickstarter start-up funds campaign and then through partnership with other financing and production entities. Our intention is to enlist the support of the book’s global fan base and expand its already impressive audience. We’re down to two weeks left in our Kickstarter fundraising campaign and are continuing to do outreach work to drum up more support for our project. We seek to raise $35,000 to cover the costs of puppet design, armature creation, motion exploration, character development, costume design, and visual effects.”

For more information about the film, please visit www.tooloudasolitude.com. 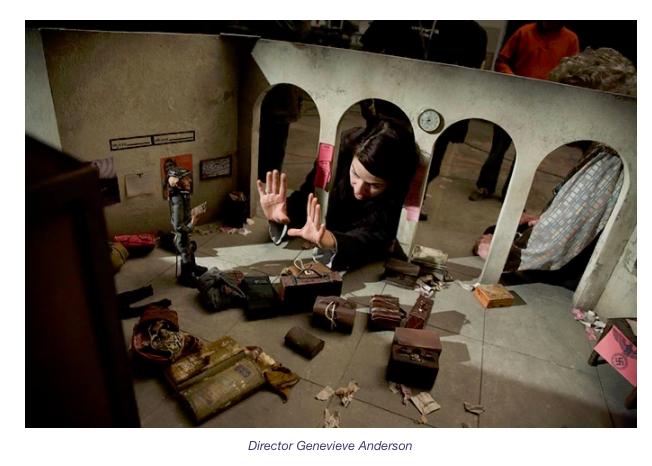 “For thirty-five years now I’ve been in wastepaper, and it’s my love story…I am a jug filled with water both magic and plain; I have only to lean over and a stream of beautiful thoughts flows out of me.” 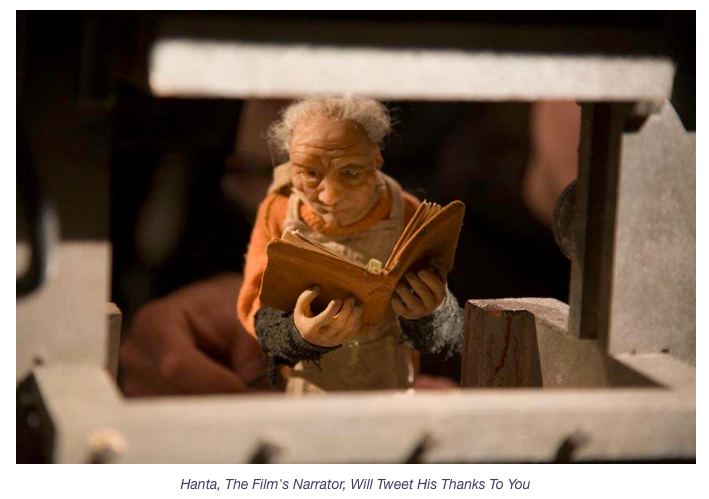 “I felt beautiful and holy for having the courage to hold on to my sanity after all I’d seen and had been through, body and soul, in too loud a solitude.”

Composer Sebastian Evans is scoring the music for Nickelodeon Animation Studio’s “Teenage Mutant Ninja Turtles” TV series. Based in California, Sebastian Evans learned music theory as a kid and began to play piano when he was 10 years old. Evans’ mission to pursue music began after watching “Return of the Jedi” when he was seven. After participating in various musical entities until he reached college: a jazz band, concert orchestra, drum line and musical theater. Over the course of time Sebastian Evans also taught himself how to score music as a working professional.

“Sebastian Evans is one of the only black Composers in the industry, and he’s quickly rising in the competitive world of TV and film music. Evans is a creative type who is rapidly gaining accolades within the industry. Invigorating several hit animated television shows with his unique style, Sebastian has received considerable acclaim from fans and critics alike. Most recently, Sebastian’s distinct sound has helped reinvent the “Teenage Mutant Ninja Turtles” franchise starring Seth Green and Sean Astin. From his head-bob inducing main title theme to his seamless blend of Far East and Western musical styles, Sebastian provides a lively score that’s helped reinvent Nickelodeon’s Emmy-winning series for a whole new generation. Sebastian has also created scores for other hugely popular shows including “Cartoon Network’s Ben 10: Omniverse”, starring Yuri Lowenthal and Joe DiMaggio, “Transformers: Animated”, starring David Kaye and Tara Strong as well as “Super Robot Monkey Team Hyperforce Go”, starring Greg Cipes and Mark Hamill for Disney. He has also worked on various projects for “Warner Brothers” and “Adult Swim”. Also, in case you were wondering, his favorite Ninja Turtle is Donatello.”

Earlier this week in June 2016, a phone interview was booked between Sebastian Evans and Writer for Examiner, Nicolette Mallow.

Nicolette Mallow: When was the moment you realized the power of music and that you wanted to make music? How did you know that you were meant to be a composer?

Sebastian Evans: The day I saw “Return of the Jedi” for the first time when I was 7. That was when I really remember feeling something from the music and I wanted to replicate it myself. Specifically it was the moment when Admiral Ackbar says “It’s a trap!”… Right then and there I wanted to learn music. I wanted to know how to make the audience feel a certain way just by hearing the sounds. That scene in “Star Wars” stuck with me and I started taking music lessons soon after. By the time I was 10, I could play the piano and as time went by. I learned all kinds of musical styles. Eventually I moved out to L.A. with my band, but that didn’t work out. So then I got a job after sending demos to various studios. Warner Bros. hired me for “Cartoon Monsoon” which was an animated pilot program online. Later I made some connections standing in the “Star Wars” line at Mann’s Chinese Theater to see “The Phantom Menace”. Then I pitched to Disney. Along the way I met Ciro Nieli (Executive Producer of “Teenage Mutant Ninja Turtles” for Nickelodeon) and we began working together on various projects.

NM: Do you have a music ritual or a method of operation for when you create and compose? Or do the projects flow naturally and you write from the heart as it comes along?

SE: I used to write a lot more from the heart when it was personal, like for the band or my own art portfolio. But when it’s a project for a team: my style is based around the desire to reflect the Director’s vision. I want to support the film or the story. I try to stay flexible because you don’t always know exactly what the team wants. My focus for work projects are dictated by the team and how I can bring my own musical style to meet their vision.

NM: I am unfamiliar with writing music and putting audio or soundtracks onto film. What is it like writing for “Teenage Mutant Ninja Turtles”?

SE: Ninja Turtles has a lot of underground hip hop influences and a lot of loops. The music is often subtle and grey as to not overpower the story, dialogue or the characters. But the Director is also seeking to get something across that emotes something in a scene that would not be as prevalent without the music accompanying it. Music foreshadows events that are about to happen, or perhaps it uplifts the mood or makes the tone more serious. It all depends on the situation at hand. We have a couple of meetings every episode and we discuss what the scene needs. This helps me create a score that will benefit the character building of the story within each episode.

NM: Did you always intend to write for animation, comics or cartoons? Or did this path sort of unfold naturally?

SE: Yes, it all sort of unfolded naturally. My end goal in the future is to work on movies, but I really love working on animation for television. It’s been a learning experience and very rewarding because I never imagined that I would be where I am now. My roots in music are very scattered and I grew up listening to classical, like Mozart and the greats. Yet I also love metal and alternative. I will play Mos Def, Timbaland and Wu Tang during the same duration as I listen to Bjork or classical. So, yeah, I would like to explore as many characters as possible through TV and film in the future. But I am grateful for where I am right now and enjoy working on animation.

NM: Out of all four ninja turtles (Leonardo, Raphael, Donatello and Michelangelo), why is Donatello your favorite?

SE: Donatello seems like the outcast. He’s the brains and the nerd of the group. Donatello is also a romantic yet he’s very shy. And I just like him because he’s cool with being different and I felt a kinship to his character.

NM: Interesting. I relate most to Raphael because he’s the most fiery, hot tempered and yet also the most sensitive. Do you have any favorite hobbies outside of composing music?

SE: I watch a lot of comedy shows and I build LEGO® bricks a lot.

NM: That is awesome. I love LEGO® models. Thank you so much for your time. I enjoyed interviewing you and look forward to watching the TV series with my godson, Micah. He loves “Teenage Mutant Ninja Turtles”.

SE: You’re welcome. I’m glad to hear kids like the show. Thank you for interviewing me today.

Note: This article was originally published on Examiner.com in June 2016.