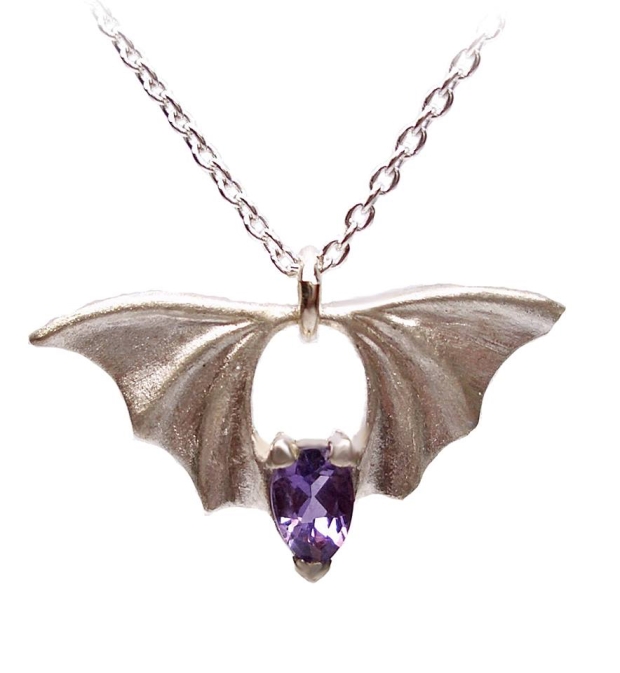 Overlooking Lady Bird Lake within Austin, Texas (ATX); Congress Bridge is a home for      1.5 million Mexican free-tailed bats. For decades bats have established themselves as one of the local and beloved mascots in ATX. And it was discovered in the 1980’s that these Mexican free-tailed bats eat millions of pounds of insects a night, including agricultural pests, ultimately providing many benefits to the city, its residents and the ecosystem.   Plus our bats are terribly endearing to the eyes and it’s kind of nice to know these nocturnal creatures are embarking on hunting flights in masses to run their little errands of the night as a great deal of the city is sound asleep.

These bats have now become a major tourist attraction from the months of March to November. From afar they are safe and harmless with no interest in humans. But do not touch or handle one, and certainly do not trap or hunt them. The bats are only to be admired and adored from a safe distance by land or water. Visitors may even want to bring a red light past dusk. Mexican free-tailed bats are small enough to fit in your hand, but large enough to easily be seen flying aloft in the sky in mass quantities. These bats fly differently than any bird, and sometimes it looks like they are flying in circles, so pay attention to their wings and shape to know when you’re in the presence of a bat.

Despite their nocturnal nature and dark coloring, bats aren’t always quiet or stealthy. Especially when they are leaving Congress bridge in millions. Sometimes they make a lot of cute and squeaky noises as they wake up and soar away from the bridge. The bats fly similarly to big butterflies and yet their wingspan looks nothing alike and they are less graceful. Fuzzy and soft with fur that is dark brown, large ears for its size and wings similar to Marvel Comics Batman logos—these migratory bats are born with “built-in GPS and night vision”.

Reflections of water cascading from Lady Bird Lake and the bright lights of downtown—many vivid photographs can be found online to see these bats hover, play and glide through the night sky in Austin. Every night during bat season, as time passes from sunset, to dusk, to twilight: people gather around Lady Bird Lake to see the atmosphere become consumed with gusts of bats pouring out of Congress Bridge. Departing in millions after sunset beneath Congress Bridge before the bats return back around dawn. Some people like to hang out on the bridge, but a boat is another fun option.

Fortunately there are many local boat tours and city-wide destinations to discover and experience the best viewings of these beauties. Capital Cruises Internationally Famous Bat Watching Tour is a good choice and I have attended once, even thought I am a local Austinite of 20+ years. The tour only cost $10 and they take out a infrared light that glows colors of reds into the sky. Making it quite easy for the human eye to capture the live visuals of millions of bats pouring out together in droves. For locals and visitors alike, it’s a remarkable sight to see! Sitting on an electronic boat, watching the bats can be rather hypnotizing and exhilarating to watch. As if the bats are putting on a show for us all, without any of the cruelty of a standard zoo or a traveling animal circus. However I do recommend choosing the covered boat as these bats are just waking from a deep sleep.

According to Bat Conservation International, “When engineers reconstructed the Congress Avenue Bridge in 1980 they had no idea that new crevices beneath the bridge would make an ideal bat roost. Although bats had lived there for years, it was headline news when they suddenly began moving in by the thousands. Reacting in fear and ignorance, many people petitioned to have the bat colony eradicated. About that time, Merlin Tuttle brought BCI to Austin and told the city the surprising truth: that bats are gentle and incredibly sophisticated animals; that bat-watchers have nothing to fear if they don’t try to handle bats; and that on the nightly flights out from under the bridge, the Austin bats eat from 10,000 to 20,000 pounds of insects, including agricultural pests. As the city came to appreciate its bats, the population under the Congress Avenue Bridge grew to be the largest urban bat colony in North America. With up to 1.5 million bats spiraling into the summer skies, Austin now has one of the most unusual and fascinating tourist attractions anywhere.”

In 2007, the city of Austin changed the name of the reservoir running beneath Ann W. Richards Congress Bridge from Town Lake to Lady Bird Lake. The name change was a controversy in-and-of itself as the Former First Lady of the United States, nicknamed Lady Bird Johnson, was against the idea of naming this lake after her and wished for it to remain as is. However, when she passed away the city opted to change the reservoirs name in honor of all the hard work, dedication and endless support that Claudia Alta Taylor “Lady Bird” Johnson bestowed upon the state of Texas. Particularly her involvement with the Town Lake Beautification Project in Austin: the state capital of The Lone Star State.

Thankfully these special and unique Mexican bats living on Lady Bird Lake beneath Congress Bridge are forever protected by the city, solely because of individuals like Lady Bird Johnson and Merlin Tuttle. However, Austin’s love for bats exceeds far beyond Congress Bridge. Bat-related art and merchandise can be found all over the city at many local gift shops. Franzetti Jewelers is a perfect example of a local company that has taken a mascot of the city and turned it into beautiful jewelry. Designing necklaces, rings and pendants; Franzetti Jewelers offers silver and gold, bat-inspired jewelry with stones of garnet, blue topaz, citrine, peridot, onyx, amethyst, smoky quartz and white quartz.

For more information regarding the Mexican free-tail bats of Austin and the best times to find them this summer and fall under Congress Bridge, please consult www.batcon.org.

Note: This article was originally published on Examiner.com in July 2015. 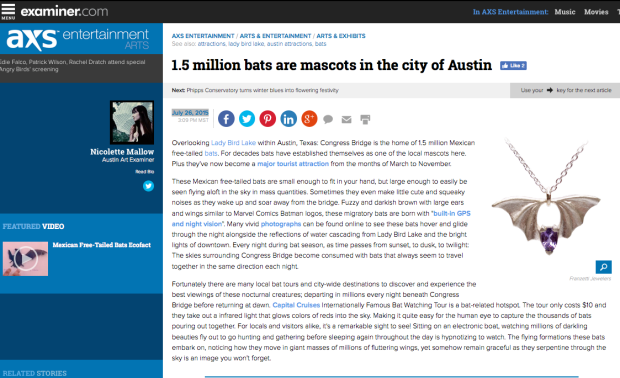 ‡ Nicolette Mallow is an Artist: writer, dancer, vocalist, thespian, and model. Writing is Mallow’s strongest artistic skill. Internationally published in the United States and Europe, Nicolette has obtained 110+ publications thus far. Mallow has interviewed an extensive list of talent and collaborated with companies and PR teams from Texas Monthly, National Geographic, Prevention Magazine, HBO Films, The Hollywood Reporter, SXSW, The David Lynch Foundation, Cine Las Americas, The University of Texas at Austin, and more. Presently her portfolio entails 12 national awards or scholarships, including both individual and group projects. Working with Press and Publicity teams from companies like Sunshine Sachs, Fons PR, Frank PR, and CW3PR — Mallow can liaise with publicists, entrepreneurs, and their brands. Since 2005, for 16 years, Nicolette Mallow has covered hundreds of press, corporate and red carpet events as a (dyslexic) writer. Mallow has interviewed talent far beyond her years, including Jimmy Chin, Greta Gerwig, Bob Roth, Dr. Travis Stork, Joan Lunden, Larysa DiDio, Lauren Handel Zander, James White, Jay Roach, Naomi Whittel, and Roc Chen. Once, she was a public speaker for a national business conference. Her career is diverse and transcends a vast array of industries, but the focus is always on the arts. Nicolette Mallow does enjoy all forms of writing, but her favorite writing genres to create entail editorial, arts & entertainment, literary journalism, travel, magical realism, nonfiction, technical and promotional publicity. Over time Nicolette has attained Press Credentials to events like Texas Film Awards (hosted by Austin Film Society), The Mexic-Arte Museum, Austin Film Festival, Euphoria Music Festival, and The Blanton Museum of Art. She also wrote for Savannah Magazine, a radio station operated by EMMIS Communications, District newspaper, and the Thinkery (formerly Austin Children’s Museum). In her spare time, Nicolette creates a magical realism novel and turns her nonfiction memoirs into short story novellas. Obtaining two degrees from the Savannah College of Art & Design (SCAD), she has a Master of Arts degree in Arts Administration (a graduate degree now recognized as Creative Business Leadership) and a B.F.A. in Writing and. Born and raised in Texas and NYC—Nicolette Mallow is also a world traveler that lives for art and loves to learn. “L’art Pour L’art.” View all posts by Nicolette Mallow